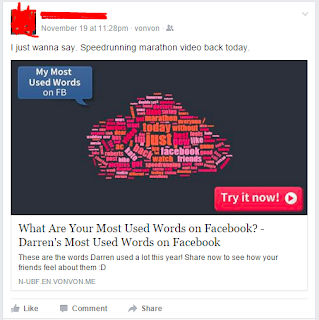 Not that giving all one's personal data to a third party has ever been safe, and not that Facebook "quizzes" have ever been safe, either, but the firestorm around the new Facebook app "Most Used Words" really struck a chord with the 17 million Facebook users gave it permission to use its data.

And after the Comparitech blog did a breathless take-down of the Korean-based Vonvon, creator of the App, on its site Sunday, Nov. 22 in which it called it a "privacy nightmare." Comparitech specifically attacked the App's "oxymoronic privacy policy And called the company and the App a "shady data dealer" but not the only one to "masquerade behind a viral quiz mill."

The "nightmare" angle spread like a virus, shared across Facebook, becoming a trending topic there and also on twitter, where many accused the App of "stealing" personal data.

By Tuesday, the company had already sprung into action.

It posted updated language on its website that it was, as of Tuesday, Nov. 24, acting to "proactively" address the concerns by "significantly" reducing "the magnitude of access privilege" required by the App. It also clarified that the App does not collect users' email addresses, "so there is no way we can spam you." It also note

It's CEO Jonghwa Kim also took to the battle to Comparitech itself, sending a rather predictable legalistic and threatening message to the firm (noting that he was "deeply concerned about your false accusation") but also mentioning the positive steps it had taken, and explaining that the information collected, "is never stored in our databases." Comparitech published his letter as an update to the original post.

As for emails, Kim notes bluntly that, "As we do not store any personal information, we have nothing to sell. Period." He swears that the App never deals with Third Parties.

The company has been in existence for less than a year, but says it has more than 100 million unique users from US, UK, France, Brazil, China, Japan, Korea, Thailand, etc. and operates in 15 languages.

But the PR response by Kim and his company seems on point, and an effective demonstration of how crisis management is done: directly address both the alleged technical and ethical problems, then let people know.


By Stephen Abbott, Principal of Abbott Public Relations, a division of Abbott Media Group, which creates written messages which inspire, inform, educate and engage, in mass media, publishing and public relations. On twitter and Facebook.
Posted by Stephen at 8:00 PM