"Newsweek" May Be Dead In The USA, But Its International Edition Keeps Political Coverage Alive [Abbott Media Group] 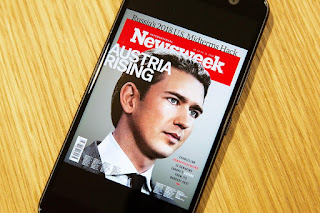 It's not commonly known that magazines in the US have European or international editions, often with totally different material.

While Americans get "news" magazines that are busy pandering to one side of the political spectrum, or pop culture slop about fads or TV and movie entertainers, the Europeans at least get some coverage of actual personalities and issues that are changing their political lives.

Take, for example, Newsweek, which has in recent years become a shadow of its former self, which is to say, a magazine more obsessed with attacking the political Right than reporting "news."

In their October 26th International Edition, they featured a story on Austria's young Chancellor Sebastian Kurz. While not entirely "fair" (and arguably inaccurate, at least in the description we could find, below) the eight-page cover story at least introduced readers to this fascinating political leader:


"In May 2017, when Sebastian Kurz took control of the center-right Austrian People’s Party (OVP), he remade it in his image. Lest the world underestimate the significance of this, the thirty two year-old rebranded the OVP as the Sebastian Kurz List–New People’s Party. Seven months later the conservative populist became Austria’s youngest-ever chancellor, in addition to the world’s first millennial head of state and, according to some analysts, the future of Europe.

Like other right-wing populists ascending to power in the European Union, the ambitious Kurz has pushed a hard-line immigration agenda in response to economic stagnation and the Syrian refugee crisis. But his youthful persona and political happenstance have elevated his status and his ideas far beyond Austria’s borders."

While the truth is out about Kurz's full conversion to the "right wing" (some on the actual right wing in Europe say he's starting to cave in to European bureaucrats on a few issues, including mass migration into Europe) kudos to Newsweek's International edition for at least covering a political leader of significance. Austria's public broadcaster, ORF, took note of the coverage, as well (In German. Use Google Translate to read in English.)

Now, if only most Americans knew who he was. Or who Angela Merkel or Emmanuel Macron are, for that matter.

Don't the media elites think we can handle such meaty discussions about politics? Do they not think we DESERVE to have those discussion.

To get a broader picture, be sure to read World Politics News daily. And please support Abbott Media Group's latest venture, the Abbott News Service.

Abbott Media Group can be found online at www.abbottmediagroup.com.
Posted by Stephen at 1:42 PM No comments: