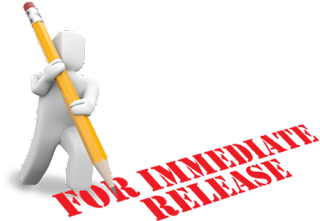 Long gone are the days of your PR firm or your own organization simply sending out a press release to the media, sitting back, and thinking that the job of promoting product, service, or individual has been completed.

That's because the news media are no longer the sole audience of the news release.

Stephen Abbott of Abbott Media Group is skilled in using tried and true tools and techniques such as the news release, putting them to work in new ways.

AMG understands that news releases today can play several functions in the promotions process,. Releases sent to the media aren't necessarily to ensure immediate coverage. In fact, it's often unrealistic to assume that everything sent will be published.

In Abbott's political campaigns, frequent releases have served the purpose of showing that a campaign is active, has hired staff, is raising money, is engaging with voters, and is seriously contesting the race. And it must be understood that releases from political campaigns have several audiences. Not just local news media, which may or may not be covering local politics, but also political leaders, local business leaders, elected officials, and of course voters. Sometimes releases specifically targeted to these Publics make more sense than the single, standard  Release

Releases written for business can play a similar role by simply reminding local news media and others that the business is active in the community and open for business.

Releases sent to internal Publics also have a reassuring effect, and can communicate best practices within a business organization, as well as communicating new policies and procedures to everyone, not just to a select few. Effective internal Communications also build a sense of rapport and togetherness within organizations, reducing gossip and misunderstandings, as well as employee turnover.

They can also be employed to convey the new or long-held mission and vision of a group or company. These reminders, written in news-worthy, fresh ways, help solidify the reputation of the group or company within a community, and help clarify the purposes towards which they're striving. They also clear up misconceptions that could damage reputations or cloud the purpose of a company in the public's perception in the long term.

News releases, of course, continue to fill the traditional role of introducing new products and services to current and future clients and customers. They still must primarily be sharing something NEW, and be  News Worthy in order to be considered for print and digital distribution. But they also can demonstrate to clients that a business has the expertise in the field in which they operate, capable of bringing the latest technology and techniques to bear on their behalf.

Frequent news releases posted on a company or campaign website are an easy way to provide fresh content for visitors. Web content that is frequently changing and updated ranks higher in searches.

Finally, news releases can play a vital role in conveying to relevant Publics within the community that a business is engaging actively with it, playing a positive role by giving back through charitable giving and social involvement. This has the effect of building positive feelings towards the business, enhancing its reputation and making future business transactions with them more likely.

AMG and Stephen Abbott understand how to fully employ all the aspects of news releases, and use them to the fullest effect on behalf of clients. Contact AMG today for more information. www.abbottmediagroup.com.
Posted by Stephen at 12:45 PM No comments:

About That Controversial Gillette Ad - Should Corporations Engage In Social Commentary?

About the controversial Gillette ad, it's beautifully filmed and one could argue that it simply calls on men to step up and do what's right when they see men bullying and belittling women. Great. Long overdue, and there's nothing wrong with that general sentiment.

But the #MeToo movement the ad references often devolves into anti-male hate and a generalization that all men are inherently aggressive by their very nature, and need "fixing." This turns this into a politically-charged ad, and a socially polarizing one.

Should corporations be involved in political ads and "virtue signaling" about social issues at all? From a #PR point of view, these kind if ads can appeal to one side of an issue, but repel others, so they are inherently risky, and divisive.

Gillette, and its parent company Procter & Gamble, likely assumed that everyone would be on the side of not being rude to women, but the perception of the ad as an attack on all men, as some in the Me Too movement have sometimes sounded, seems to be overwhelming this benign interpretation of the ad, leading to a massive #boycottGillette effort, emerging on the social platforms Twitter and Facebook.

We have of course seen this before, as when companies such as 84 Lumber have waded into the immigration debate with a Super Bowl ad featuring illegal immigrants crossing the border.

Gillette now faces a boycott from men, their primary users, while getting praise from women. A dangerous economic strategy, and a warning for other companies that are tempted to wade into divisive political issues.

Stephen Abbott
#AbbottMediaGroup
Posted by Stephen at 11:55 AM No comments: