Ellen's Cafe in Dallas, Texas is finding out that words have meaning - and that not using the right words, especially in political discussions, can have severe consequences.

If their recent post is accurate, they profoundly blundered when they posted a message on the bottom of their customer receipts that they wanted to advocate for, "reasonable and effective gun regulations."

Their blunder wasn't posting such a message (they have that right, as all Americans do) But because they didn't understand that there's a certain way one speaks in politics and people want to hear "key words" when discussing "hot button" issues - be it gun rights, abortion, among others. And they apparently didn't know this before wading in. 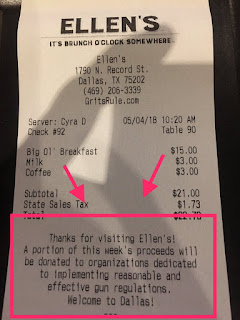 The language they used, for instance, "reasonable and effective" are viewed as 'code words' by those on the political Right and specifically by NRA members as language the Left employs to advocate for strong new laws against gun ownership.

And that's just what happened in this instance. The message was interpreted as a political call to arms to the cafe's liberal customers.

The NRA's twitter account itself posted a photo of the receipt (at left) urging members to avoid the restaurant, which was located near this year's NRA convention site.

The receipt language went viral, of course, and calls for boycotts of the cafe spread across the internet.

The problem was, the cafe owners say they SUPPORT gun rights and the Second Amendment.

"The opposite is true. We support the Constitution, including the 2nd Amendment, 100%. And like the NRA, we also support finding solutions to the senseless killings that happen much too frequently. We believe those two things are completely compatible."

The cafe, by all accounts, meant well. The cafe held a sympathetic "round table" interview with Dallas Police officers last October about the July, 2016 shooting that killed two Dallas officers. They don't appear to be "anti-gun" any more than they are "anti-cop."

The media, of course, is focusing now on the detestable death threats and anger the errant language provoked, and there really is no excuse for that behavior.

The best lesson that can be learned from this is to use language - in politics, especially - with political sensitivities in mind. Understanding what your audience wants to hear is key to getting your message out to them - whether you're a politician, an interest group, or a cafe owner.