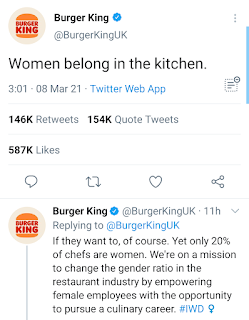 The second and third tweet below the original one went on to explain that more women should go into the culinary arts, and study to become chefs. A worthy goal, but few people got beyond the shock of the first statement, which is a bigoted, Archie Bunker-like slam against feminism and women working.
The firestorm that this ham-fisted statement created on Twitter and offline as well didn't much more damage to the Burger King brand on both sides of the ocean then the positive good that their internship program will ever do.
Just another lesson that being too clever by half can backfire very quickly, and that a second and third pair of eyes should look at everything that's posted in a national and international ad campaign, which is what anything posted to Twitter needs to be considered.
Posted by Stephen at 3:57 PM No comments: 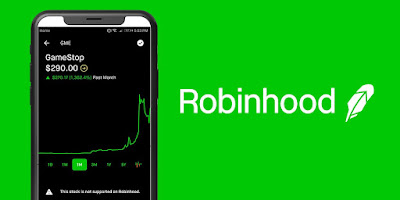 When the lists of 2021 PR disasters in business is written next January, Number One on that list will likely be the Robinhood app debacle of this week that left their reputation in tatters.
THE SITUATION:
The Robinhood app, which allows average investors access to the stock market, buying trades without fees, abruptly froze users' ability to buy shares of some hot-selling stocks, among them GameStop and AMC.
Of course, they were "hot" because the internet, specifically the Reddit online chat boards, had made them so, deciding that these stocks - and they companies they represent - shouldn't actually fail (as the hedge funds had decided they should, and were "shorting" their stock in anticipation of their immanent deaths.)
This caused both stocks to rise "to the moon," as many on Twitter put it, and cost the hedge funds BILLIONS because their bets now were suddenly wrong.
Enter Robinhood, which had tweeted early on in its life, "Let the people trade." That slogan became one of bitter irony when, on Wednesday, upon rumored pressure from Wall Street hedge funds and even the Securities and Exchange Commission, they froze the ability to buy further stocks in these two hot properties (but still allowed sales.)
They posted a message which said, in part, "In light of current market volatility, we are restricting transactions for certain securities to position closing only, including $AMC and $GME."
While other brokerage firms reportedly did the same - including TD Ameritrade and other big names - Robinhood received the brunt of the online firestorm that soon erupted. And in the age of Twitter, the reaction was a tsunami of anger and criticism.
What Chris Buskirk, a contributing writer for the New York Times tweeted was typical:
"$AMC was struggling due to COVID lockdowns. Hedge funds shorted the stock to force bankruptcy.
Small investors saw an opportunity & bought $AMC driving it’s price up. $AMC raised $900 million, saved the business & 1000s of jobs. But they’re the bad guys for saving the company?"
One investor said, "There is no free market. There is only a manipulated market that is built to enrich hedge funds. The "capitalists" on Wall Street are being exposed as a bunch of cry babies who aren't actually that smart. If they were so good, why not compete in the free market??"
The cynicism did not end with investors. Politicians were also    quick to express outrage at Robinhood.
New York Democratic congresswoman Alexandria Ocasio-Cortez called for hearings in Congress about Robinhood and its actions.
"This is unacceptable. We now need to know more about @RobinhoodApp’s decision to block retail investors from purchasing stock while hedge funds are freely able to trade the stock as they see fit. As a member of the Financial Services Cmte, I’d support a hearing if necessary."
U.S. Senator Ted Cruz (R- Texas) agreed with the liberal Democrat, tweeting simply, "Fully agree." (Prompting an outburst from Occasio-Cortez, in which she said she would work with other Republicans but not with Cruz, who allegedly, "almost had me murdered three weeks ago." During the Capitol Hill riot.) Whatever.
Republican Congressman Madison Cawthorn was also blunt, tweeting:
"Part of Free Market Capitalism is having a Free Market. Wall Street is pressed because normal, working Americans outplayed them."
Regardless of party differences, this rare demonstration of bipartisanship seems to indicate they will at least be some hearings in the app's future.
For its part, Robinhood tried to stop the bleeding, posting a policy U-turn Thursday afternoon (4:15 pm ET) posting on Twitter and on the app that they would restore the ability to both buy and sell these hot stocks. Vlad Tenev, the Bulgarian entrepreneur who co-founded Robin Hood, tweeting:
"Starting tomorrow, we plan to allow limited buys of these securities. We’ll continue to monitor the situation and make adjustments as needed." 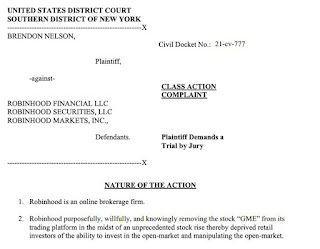 But things continued to spiral out of control for Robinhood. On Thursday, a class action lawsuit was filed in federal court (the Southern District Court of New York) against Robinhood on behalf of its clients, legitimately claiming loss a millions of dollars due to the inability to buy these stocks as they rose drastically on Wednesday morning, and while hedge funds were not similarly restricted.
Late Friday, Robinhood kept digging a hole for itself, releasing a list of 50 stocks for which they were restricting buys. This prompted the investment site  Seeking Alpha to predict the new restrictions "could lead to big exodus" from the app.
As Inc. columnist Jason Aten wrote: "It takes a long time to build a brand, but not long at all to destroy it. In Robinhood's case, it took less than a day."
PR SOLUTIONS:
So, how does Robinhood regain its reputation as a fighter for the little guy investor? Or can it?
I believe it can, but it must demonstrate in the coming months that it did not respond to pressure from Wall Street, or even the White House which many speculated had occurred.
It has already begun the work it must do, including dispelling rumors that it acted to stop trading on behalf of a hedge fund, Citadel - something which would likely mean the death of the app, if true.
Tenev tweeted,
"As a brokerage firm, Robinhood has many financial requirements, including SEC net capital obligations and clearinghouse deposits. Some of these requirements fluctuate based on volatility in the markets and can be substantial in the current environment.
To be clear, this decision was not made on the direction of any market maker we route to or other market participants."
(The California-based Sequoia hedge fund sought to squash such rumors late Thursday afternoon, tweeting, "Sequoia did not pressure Robinhood to halt the trading of any stocks. This rumor is completely false.")
Over the next few weeks and months, Robinhood needs to act decisively and speak out clearly to restore confidence and trust in its product, and, frankly, the system it works with. Speaking for an entire market is definitely a tall order, and usually not one public relations would need to take on.
But given the tremendous lack of trust that has accrued in such a short period of time (just a few days!) It's one the app must take on.
Hopefully they have a PR team that is instructing the Robinhood application's board that it cannot hide behind technicalities or even the SEC, and preparing them for the Congressional grilling that surely awaits them.
The Robinhood app must take strong, clear actions, and their PR team must then explain those actions in a confident way to investors and customers alike.
Then, maybe six months from now, the Robinhood app just might still exist.
Posted by Stephen at 1:07 PM No comments: