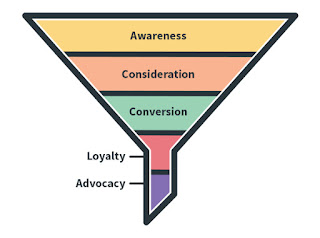 Public Relations is not Marketing, nor is is it Advertising. It's actually better. The traditional "Marketing Funnel" consists of leading people to an Awareness of a brand, then to their Interest in it, followed by Conversion (a Purchase) then Brand Loyalty, which leads to Advocacy of your brand by the loyal customers.

Which is all good, and it tends to drag customers through the process effectively, when implemented correctly.

Advertising is also different from Public Relations, and from Marketing. For example, advertisers often want to go from Awareness directly to a quick sale, which can lead to crass, high-pressure appeals.

Note that I'm not saying there's anything WRONG with Marketing or Advertising as concepts or business practices. Both are critical to understanding consumer behavior and directing them towards becoming happy and loyal customers.

But with Public Relations, we have a way in which we can "short circuit" this process, and possibly make it more effective. If such a system existed, wouldn't businesses want to employ it, alongside traditional methods?

In PR, awareness of your brand's Good Deeds and/or its commitment to its Mission and Core Values can lead directly to people becoming brand Advocates, especially online, leading to them become Loyal customers.

We've seen this over and over again online, in which a poster on Twitter or Facebook or Instagram reacts to a positive action by a company, and says, "Great move! I want to do business with a company like this!" When the poster is a known figure, you have achieved a degree of social proof - an influencer who directs others to buy and support a brand. This is priceless, and can do more for a brand than a thousand TV or radio ads.

Consider letting Abbott Media Group use social media and PR communications tools to build positive awareness of your brand!
Posted by Stephen at 9:00 AM No comments:

A recent job posting illustrates EVERYTHING that's wrong with PR today, or at least the growing perception of PR as a damaged profession with a reputation problem.

The ad, on the popular job search site "Glassdoor," read:

"We are looking for a youthful, energetic, personable, presentable, female for an overseas Public Relations position," it began, "The candidate will be the face of our Asia operation. Please send details and photo if possible."

It's signed - rare for an ad even on Glassdoor - by the male president of this company, which I've blacked out to avoid holding him up to public ridicule. Both his first and last name were included in the original ad.

This is wrong on so many levels. Aside from being an illegal job ad (gender-specific, which is forbidden by employment law) it's a bit creepy for a male president/CEO to be asking for a photograph - akin to a dirty personal ad in the back of a magazine or on the old "Backpage" or Craigslist personals, it sends a horrible message about the profession. One plausibly may wonder if he hopes to travel with her.

The ad's descriptions are equally troubling.

"Youthful, energetic" is "code" for "no one over 30 need apply. Age discrimination sucks, but it's a reality in the business world. And tolerated.

"Personable," well, of course a PR person will be personable - someone who is likable and generally likes people. Though that's a child's definition of "public relations," and every store clerk or auto show platform model can't be said to be in "public relations," just because they interact with the public - though that's a vital component for business success, for sure.

The final two descriptors, "presentable, female," are at the heart of the problem with this ad. "Presentable" seems to be a code word for "pretty." Now, there's nothing wrong with being pretty, or presentable, so long as the latter means how a person presents oneself, in dress, demeanor, and especially verbally and in writing. If THOSE were the criterion used by the CEO here, that would ELEVATE the profession, not demean it or raise ludicrous stereotypes as this ad does.

Let's also mention that the ad apparently breaks the terms of service Glassdoor has published on its own site, which state, "You may not post any job ad that ... gender, race, religion, sexual orientation, age, disability, or any other ground(s) prohibited by applicable law."

CEOs of corporations should never use the tactic of pushing a "pretty face" in front of a news conference, so stakeholders and the general public will more easily forget the bad news about a company or CEO. That plays to the basest of negative stereotypes about PR.

This amounts to putting supermodels on catwalks wearing corporate logos. Corporations should be educated by real PR pros that this won't motivate any but the creepiest of men to patronize their businesses and buy their products and services. And it won't be enough to distract the media from a company's missteps.

A bit of a disclaimer. A search for the company on Google on July 7, 2018 at 8 pm (Central) produced no results. A Linkedin profile mentioning his name and company produced a blank page. It's unclear whether the ad, posted on July 7, 2018, is for a legitimate operation. If so, shame on the company's president. If not, shame on Glassdoor for facilitating this gross person's fantasy.

----------------
Stephen Abbott is the principal of Abbott Media Group. He's not "pretty" nor "young." He's a male over 50, and has over two decades of actual experience building brands and reputations. Abbott Media Group can be found online at www.abbottmediagroup.com.
Posted by Stephen at 12:00 PM No comments: