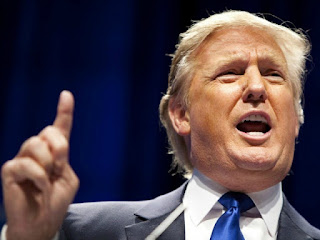 Political newcomers will make mistakes, and perhaps it's a bit unfair to judge someone like Donald Trump to harshly when it comes to his many gaffes and errors when speaking.

After all, his supporters often say, Ronald Reagan also made gaffes during his 1980 campaign. Jokes were made about his misstatements, and his advisors said it was okay for him to make the occasional mistake when speaking because, after all, he wasn’t a professional politician. "Let Reagan be Reagan," was their frequent statement.

And that’s fine. Everyone is going to say something incorrect on the campaign trail. Barack Obama famously said he had been to almost all of the 57 states, after all. George W. Bush had made his share of verbal faux pas, and so has anyone who spends seven days a week on the road campaigning for president.

In the end, however, words do, in fact, matter. And actually speaking the right words is critical for a candidate if they want to effectively convey their beliefs, principles, hopes and aspirations to voters.

And saying something that is inconsistent, shocking, or simply incorrect can be devastating to a candidate’s credibility.

That's why the words Donald Trump uses really do matter; and they matter in any political campaign.

They matter to those who don’t support him almost as much as to those who are inclined to do so. In fact, in the final analysis – and on Election Day in November, if he’s the Republican nominee – the words Trump has used in this election year will either convince people to either acquiesce to his candidacy and support him, even if they didn’t in the primaries, to stay home, or to vote for the Democrat or another candidate not a member of the two Major Parties.

Of course if too many voters make any of these choices other than supporting the Republican nominee, it could easily have devastating consequences for House and Senate candidates and other statewide candidates on the ballot.  And party officials are fearing just that.

In my professional career as a campaign consultant or as a manager for a political candidate, I’ve stressed repeatedly how important messaging is to a campaign’s success.

Candidates, especially wealthy ones and first-time ones, tend to believe that whatever falls from their lips is golden. I take pains to make it clear to them that this is not the case.

In fact, based on my experience with them, many first-time candidates seem to believe they don’t need to use a script or to answer the same way each time they’re asked about a particular issue.

They believe "winging it" will help them come off as more authentic and even "folksy."

And while being universally known with near 100% name recognition, as Trump enjoys, may allow a bit of a "pass" and a cushion for errors and even a bit of deliberate low-browism, two examples from The Donald’s campaign thus far will illustrate why this is the wrong tactic, even for him.

Donald Trump’s campaign announcement speech, as written, was brilliant, to the point, and conveyed a message and a candidate that was strong and focused.

His audience at the Trump Tower in New York, and the television audience who watched it on TV and hundreds of times thereafter online never heard this speech.

Instead, he took the bones of this written speech – written perhaps by an aide but clearly expressing Trump’s own views – and ad libed. Profusely. What was written as a 20-minute speech lasted well over an hour.

This is the origin of his famous/infamous “they’re rapists” comments, along with numerous iterations of his brags noting that he’s “very rich.” These set off alarm bells, though to be fair, they also attracted many disillusioned voters who were seeking just that kind of “politically incorrect” and bold language.

Fair enough. But the problem with this is that the result of this speech was almost universal condemnation and a silent fear that, as the primaries progressed, more “straight talk” would bring harm to the Republican brand. Which of course it has, possibly irreparably.

(Note here that Ronald Reagan's announcement speech was dignified, uplifting and greatly beneficial to both his image and, ultimately, to that of the Republican Party.)

That brings us to the second example.

The March 30 interview with Chris Matthews – a liberal progressive, with whom a seasoned conservative politician would take great care answering questions – demonstrated why off-the-cuff policy-making is also a bad idea.

His seemingly off-handed remark that women who get abortions would be “punished” was not only a rash and dangerous statement, it shocked pro-life campaigners who, for decades, have said just the opposite, and have fought the stereotypes of the Left that being pro-life is somehow “anti-woman.”

Not to mention his seemingly off-the-cuff remarks that NATO should be all-but disbanded and that Japan and South Korea should be armed with nuclear weapons. Pacifist Japan, along with South Korea, reacted strongly and angrily to these comments and those suggesting they’re not paying America enough for their defense (they pay over half of all expenses for having our troops there.)

But whether you agree with Trump’s policies or not, the impression, if not the reality, was that he was making them up on the spot. He recanted the abortion position later that day – perhaps at the demand of his shocked and appalled aides – leading one to believe he did in fact make them up.

The bottom line is that any candidate, be they running for president or city council, must be clear, articulate and consistent when they speak.

Policies spoken to one group that don’t match up when said to another suggests clear pandering, and subconsciously, that the speaker is inconsistent and, by extension, untrustworthy.

And it’s worth noting that presidents must always measure their words, and express their policies, in a very cautious and mature manner. There’s a reason why presidents have spokesmen in the White House press room calmly and cautiously answering reporter’s questions each day.

It may be frustrating to reporters looking for a “gotcha” moment, but in truth, any rash or poorly thought-out statement by a president or his spokesman could send stock markets reeling and, as we’ve seen with our Asian allies, diplomatic incidents occurring.


(And back to Reagan; he never appeared to anyone to be making up his philosophy or principles as he went along, despite occasional missteps on the campaign trail.)

Candidates should therefore view what Donald Trump is doing as a textbook case illustrating how NOT to handle political speech. To take the opposite lesson would make my job infinitely harder, not to mention the destruction and damage that could be done to individual campaigns – and to political discourse in the United States, generally.

Posted by Stephen at 3:00 PM No comments: