If you're one of the largest pet supply retailers in the USA, how do you take off all your pet owner customers? Removing the beloved cat and dog characters from your stores logo is probably the best way. And that's exactly what they did.

PR Week reports that the pet store giant announced in early December its plan to remove the red and blue characters from the front of its stores nationwide, replacing it with simply the word "Petco" in black lettering.

The logo change is reportedly part of Petco’s rebrand to "Petco, The Health + Wellness Co" from "Petco Animal Supplies.

But many customers were having none of it. 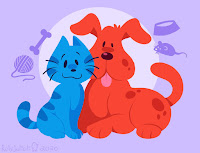 The new, pet-free Petco corporate logo was an immediate PR disaster, trashed online and dubbed as "cold and lifeless."

The pet store clarified that the animals - apparently named Ruff and Mews - are “here to stay.” But only in their advertising.

That didn't do much to mollify Twitter, which scathed the brick and mortar retailer.

"I don't CARE if they're still present in advertising I want them back to being present on the LOGO gosh darnit," said one Twitter user, @anoutlawed, in one of the more printable remarks.

"Dear @Petco, Your new logo is cold and lifeless. Is the next step phasing out pets, until you're just "co" Cause at this point - might as well."

And another said, bluntly:  "New logo is complete garbage. Lol I dont think I've ever seen a worse downgrade. Fire whoever thought of this s****."

Cool Guy Mark wrote: "Why do you hate your customers? New logo is neutered 😞"

It's unclear what the company was thinking. and it's also unclear whether they did any research on how beloved these characters actually were before making the change public.

The company's initial response was apparently silence, indicated by the PR Week article noting that a comment was not immediately forthcoming from the company PR department, which clearly was not the best move, especially when a magazine and online industry journal for the public relations industry calls for comment.

Chalk it up to the year 2020 taking two more victims. Unless the company backtracks in early 2021, which it surely should.